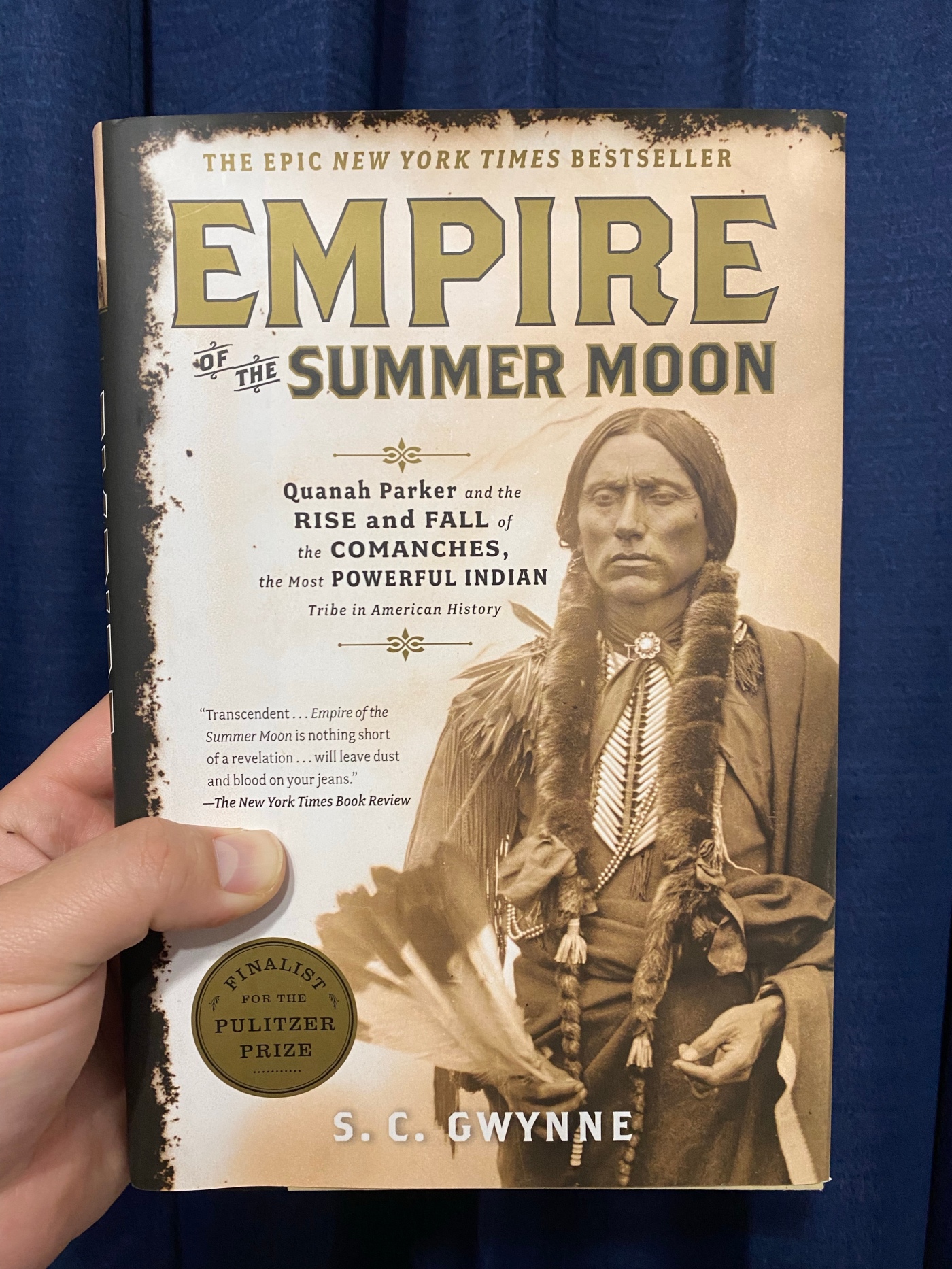 The book is Empire of the Summer Moon by S.C. Gwynne. It was originally published in 2010 by Scribner. I read the 2010 first edition. I read it in February of 2022.

I first heard of this book from the Joe Rogan podcast. He mentions it often and has had Gwynne on as a guest. From Rogan’s reference to the book and the story of Quanah Parker, I decided I definitely wanted to read it.

The book is about the American plains Indians, specifically the Comanche, and white people’s expansion westward in the early 1800’s. It centers around the story of Cynthia Anne Parker, a white girl who was kidnapped by the Comanche Indians when she was nine. The Indians brutally raided her family’s home in central Texas. They killed many of her family members and kidnapped her. She then fully assimilated to the Comanche Indian way of life. She forgot the English language and all of her “white ways.” So much so that when recaptured by white people, she desperately wanted to run away and rejoin the Indians.  She gre up with the Comanches and married a war chief and had several kids. One of her children was Quanah Parker who would grow up to become the best and final war chief of the Comanches. The book chronicles how the Comanches were one of the last Indian tribes to come into “civilization” and live on reservations. Quanah Parker led this “surrender” and assimilated tremendously into the “white ways.” He became a successful business man and big-balls cattle owner amongst the white people, often beating them at their own capitalistic games.

Gwynne is extremely honest and gives a fair account of both sides. He accurately tells of both Indian and white atrocities. He doesn’t point fingers at the cowboys or the Indians. He points the finger of blame and shame at flawed humanity.

There wasn’t really anything I disliked about this book. The page count stayed reasonable. The characters were compelling and interesting throughout. It’s really a fantastic book.

I learned that the movies and pop culture totally got it wrong. The idea of the noble savage is inaccurate and kinda racist. Native Americans were brutally torturing and killing eachother just fine long before any westerner got here.

The most compelling point was how Gwynne handles the complexity of humanity. Some are “good,”  some are “bad,” and some start out one way and end up the other. It’s not as simple as brown people good, white people bad, or the other way around. Gwynne expresses this point well.

I would highly recommend this book to anyone interested in Texas or American history. Gwynne is a fantastic historian. This book is extremely accessible. It reads like a movie and stokes interest in learning about history.  I definitely look forward to reading more from Gwynne and any other similar author.