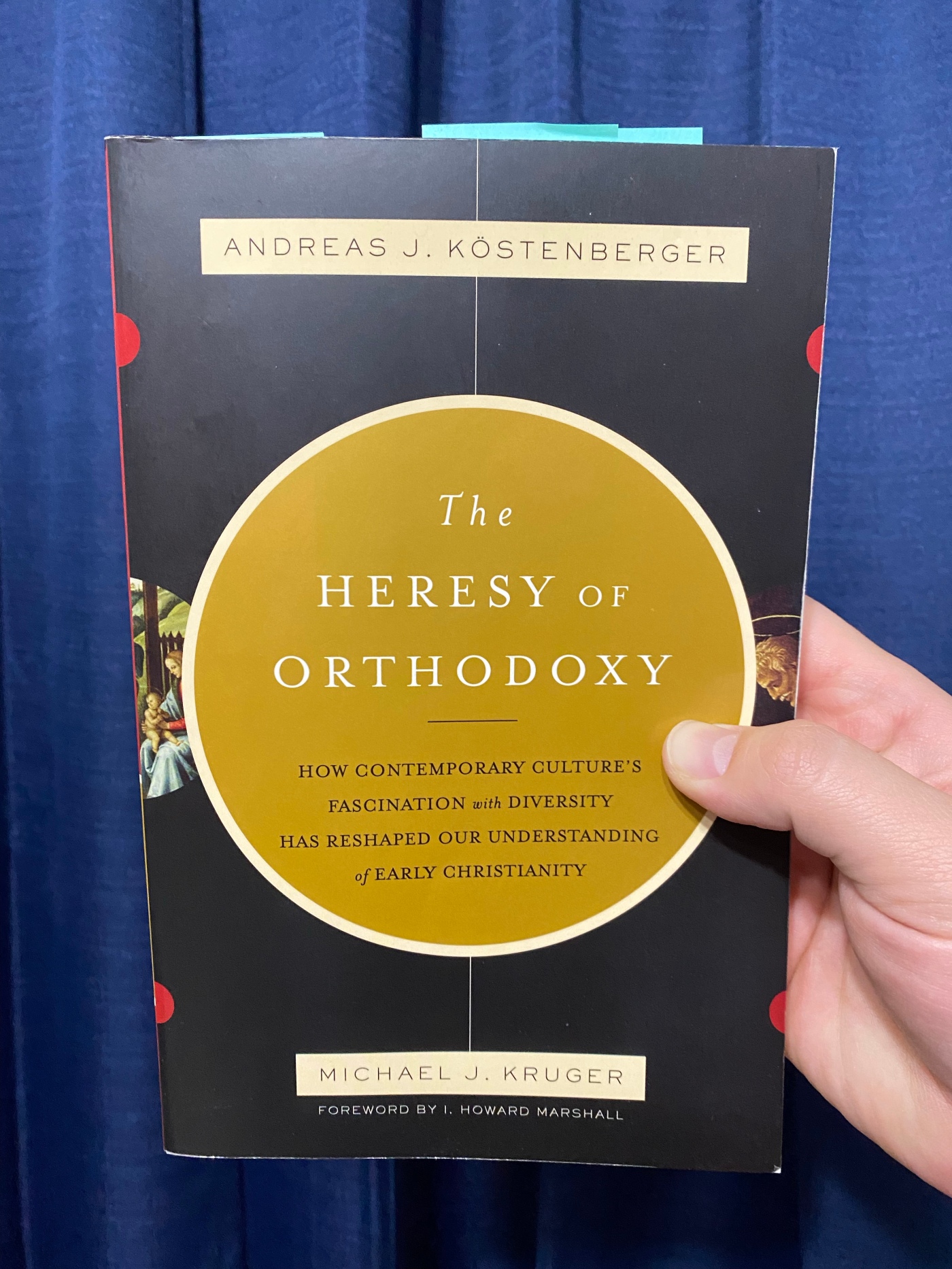 The book is The Heresy of Orthodoxy by Andreas J. Kostenberger and Michael J. Kruger. It was originally published in 2010. I read the First Print paperback edition. I read it in January of 2022.

This is the third book by Kruger I’ve read. I first learned of Kruger from a YoutTube video where he appeared on stage with James White talking about Christian church history. I was very impressed by the talk he gave in that video and have been reading his books ever since.

Kruger is a faithful Bible and Church historian. Usually biblical history resources are all Catholic or atheist. Kruger starts with the presupposition that the God of the Judeo/Christian Bible exists and he has spoken.

This book is a rebuttal to the Bauer-Ehrman thesis which basically states that in the early days of Christianity there wasn’t a decided orthodoxy but rather a diversity of beliefs about Jesus that all competed for a claim to “orthodoxy” and the Christianity we know today is just what happend to win out in the end. Thus making it a “heresy” to claim that there was any sort of orthodoxy from the beginning.

I like that Kostenberger and Kruger take a highly academic, sometimes dry subject of Christian history and biblical textual criticism and make it abundantly accessible. They break the issues down into layman’s terms. This is not an academic paper. It’s a book for anyone to read.

The argument put forth is amazing. One of their main points is that The Bauer-Ehrman thesis doesn’t take the Bible as any sort of historical artifact. That’s an astonishing oversight of these scholars. Why wouldn’t they take the oldest manuscripts of what was going on in the beginning of Christianity (the Bible) as a clue as to what the first Christians thought? That’s a biased, prejudiced decision that sets the Bauer-Ehrman thesis on quicksand from the start.

Also, Kostenberger and Kruger point out that the New Testament follows the same pattern as the Old Testament as you would expect it should. The Old Testament has a God that redeems his people in the exodus from Egypt as per his previous covenant, then he gives them a written inspired law, then he has his people build a temple for his dwelling. In the New Testament Christ redeems his people, then the inspired apostles go about writing and preaching the gospel of the new covenant, then he sends the Holy Spirit to dwell in the temple of the body of believers. It’s amazing once you see it. It makes sense that God would leave his redeemed people with a written word for the new covenant just as he did with the old covenant. It follows the same pattern. This is how God works.

I liked that Kostenberger and Kruger kept the book at a tight 235 pages. With such an in-depth topic, there is certainly temptation to flesh out some of the greater themes of Church history and textual manuscript traditions. But there are other books that cover this. The author’s intent is fulfilled in debunking the Bauer-Ehrman thesis to a point that becomes laughable.

I’d recommend this to all Christians wanting to know more about Church history and who want to be able to speak to the anti-Christian rhetoric that’s often found in mainstream material. Christians need to know their history. Kostenberger and Kruger give a perspective that stays faithful to scripture and remains consistent with history.