If someone asked me for an exhaustive history and origin story of comics I’d point them to Gerard Jones’ book, Men of Tomorrow: Geeks, Gangsters and the Birth of the Comic Book. This book is often cited and hailed as the definitive guide to the creation story of comics.

Jones goes far back in his account of how comics came to be. He explains how comics were born out of the newspaper comic strips and how an entire industry was created from reprinting the Sunday funnies into magazine form and then producing original stories.

I love comics and like any fan I want to see behind the scenes. I want to go “inside baseball” as they say and learn how all the nuts and bolts work. Men of Tomorrow is perfect for that. What I like most about this history of comics is the “geeks and gangsters” that surround the origin. Jones does a great job of showing what America was like at the turn of the century and through the Twenties when newspaper comic strips were at the height of popularity. Jones notes that the generation that brought comics into existence was a consumer culture, a people that more and more found their identity in what they bought.

“American’s no longer wanted to be identified by class, ethnicity, or region. But to be a Cadillac driver or a Valentino worshipper or a science fiction reader gave a sense of self and community, especially to young people trying to draw black-ink borders around themselves in a world of runaway change.”

As a comic book fan this sense of identity and community in culture makes sense. The tribal camaraderie and rivalries use to be a lot worse than it is today. Back when there was basically the Big Two, you were either a Marvel fan or a DC fan.

And you stayed loyal to your brand. Today, like most industries now, there are too many producers putting out great products to pick sides like this. But this mindset is where comics came from. Marvel vs DC, Ford vs Chevy, Coke vs Pepsi. America loves competition because it pushes the rivals to do better and the business of comics was no exception.

The comics of the early 1920’s were a true reflection of American life. There used to be an old saying, “see you in the funny pages.” It was how people said goodbye. What people meant was they would see something their friends would do in the Sunday funnies. It was a way to say our lives are so silly, just like those comic characters. “The comics offered honest looks at social classes—the race-track lowlifes of Barney Google, the social-climbing Micks of Bringing Up Father, the fussy townsfolk of Gasoline Alley—unavailable in any other popular medium.”

Along with these true-to-life glimpses, the first comic strips showed fantastic wonders as well with Winsor McCay’s Little Nemo and George Harriman’s Krazy Kat. They showed us who we were and what we could dream up. Jones paints this environment as the backdrop for the lives of two unassuming boys from Cleveland, Joe Shuster and Jerry Siegel, the creators of Superman. “For Joe and a whole cohort of kids born around 1914, the onset of adolescence coincided with a revolution in the comic strip that aimed the medium straight at their hearts. They began to view the comics as their own world.” This is one of the most fascinating aspects of the history of comics. Comics began as reflections of real life until those reflections became more and more fantastic finally leaping beyond imagination into the realm of super powered heroes. Superman himself started out with very limited powers and fought villains like crooked landlords and muggers.

From this book it’s clear there is a spirit of entrepreneurship around the birth of comics. Some of the stories of the first comic book artists and writers reminds me of stories you hear from early Silicone Valley, young men and women staying up all night to finish a project that could change the world. Ingenuity and ambitious determination driving them to complete a goal, to fulfill a vision of something they felt was bigger than themselves. One story from the book that embodies this idea is when a comic printer named Lev Gleason suddenly found himself able to reserve millions of pages of pulp magazine paper. The only catch was that he had to come up with an idea for a comic book immediately. Gleason turned to one of the many “comic studios” that were popping up all over Manhattan. He told them to come up with 64 pages of a new comic book by Monday—it was Friday. Among these comic artists and writers was Batman artist Jerry Robinson, the creator of Batman villain, the Joker. The way he tells it they got snowed in the studio and one poor artist was tasked with plowing through the 5 foot snow-drift covering the door to go out and find food. He came back with two bottles milk and a dozen eggs. With nothing else on which to cook the eggs, they peeled tiles off the bathroom wall with art knives and fried up enough strength to get them through the weekend of long working nights to finally produce the first iteration of a hero named Daredevil.

“It was a weekend that captured an era. Twenty years later Robinson told the story to Jules Feiffer, who used it as a centerpiece in The Great Comic Book Heroes. From their Michael Chabon turned it into a passage in The Amazing Adventures of Kavalier and Clay. Commerce, luck and youth had never come together so perfectly to create a moment so evanescently American.”

I love hearing these kind of stories, young dreamers working their passion mostly for the love of the craft itself. This is how comics was born. Old business men capitalizing on a new entertainment trend and young creators and fans that had stories to tell.

Gerard Jones perfectly captures the sights and sounds (and even the smells) of early 20th century America and the young, hungry and scrappy kids that created a multi-billion dollar industry out of their imagination. I know most people won’t read this book and to be honest, it’s not for everyone, it’s the nerdiest inside look of the geekiest industry ever. But if you like business/cultural history I highly recommend picking it up. 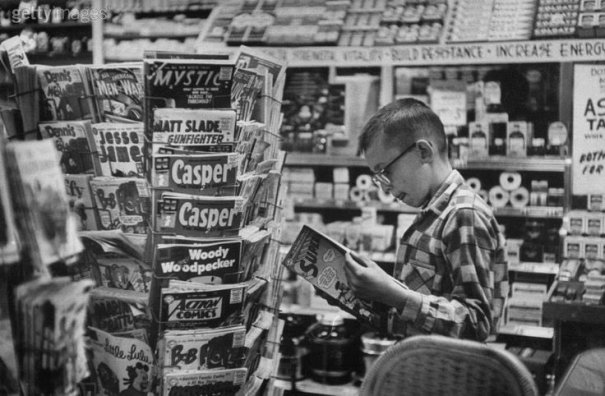