It’s a strange thing to read a book that you should’ve written. If there are two things I know in this world it’s God and comics. So you can imagine my surprise when I came across Who Needs a Superhero?: Finding Virtue, Vice and What’s Holy in the Comics by H. Michael Brewer.  Toni Morrison said, “If there’s a book that you want to read, but it hasn’t been written yet, then you must write it.” For me, Who Needs a Superhero? is that book. Brewer takes popular comic book superheroes and compares their gifts and characterization with Christian themes and attributes. How did I not write this book?

First, Brewer presents Superman as the god-like being from above sent down to our planet to save humanity. The parallels between Superman and Jesus Christ have been apparent from his first appearance—Superman’s, that is.

Brewer specifically highlights the disbelief of the Jews that God would manifest himself as a man, and lower himself to our level. He does so by referring to Superman #2 (vol.2, 1987).

As Brewer observes, “When the computer reveals that Superman and Clark Kent are one and the same, Luthor utterly rejects the idea. The authority-hungry Luthor cannot conceive that someone with Superman’s powers would pose as an ordinary man and work for a living. Luther speaks for the world at large when he says, ‘I know that no man with the power of Superman would ever pretend to be a mere human! Such power is to be constantly exploited! Such power is to be used.’” It’s clear that Lex Luthor was not considering Ephesians 2:6-7 where Paul writes “who, though he was in the form of God, did not count equality with God a thing to be grasped, but emptied himself, by taking the form of a servant, being born in the likeness of men.” This is exactly what Superman did in his disguise as Clark Kent. But Superman’s real name  offers interesting insight into his comparison with the almighty as well.

Superman’s true Kryptonian name is Kal-El, that is his first name is Kal and his sir name or family name is El. His father’s name is Jor-El. He is of the “house of El.” This is interesting because the Hebrew name for God is El, or in it’s longer form, Elohim. Brewer points out, “Matthew refers to the newborn Jesus as Emmanuel, a name that means ‘God with us’ or more literally, El is with us.” Superman, like Christ, comes from above us but stands among us. He is our savior. Ironically, the creators of Superman were two first generation American Jews from Cleveland, Jerry Siegel and Joe Shuster. There is no doubt their Hebraic heritage influenced their Kal-El’s name but I wonder if the irony was lost on them that they actually created a very Christian hero.

One of the most compelling points Brewer makes in his book is about Batman. He shows that Batman, aka Bruce Wayne, cannot accept grace and feels that he constantly needs to perfect himself to protect Gotham City.  But in this penitence Batman is a failure. He’s constantly losing sidekicks and his villains are always escaping from Arkham Asylum. No matter how hard he tries, he can never truly know peace. Brewer writes, “Batman passes through the world wrapped in mourning colors and guilt. His hard work and good deeds always fall short.” This is hard for a super rich, superhero to accept. Batman has more in common with the rich young ruler from Matthew 19:16-26 than with the downtrodden Paul. Brewer explains, “Jesus was painfully clear. If we can save ourselves, we do not need God. If we cannot save ourselves, then we need God above all else. We cannot have it both ways. We must accept one alternative or the other: We must either place our whole faith in God or, like Batman, rely upon ourselves—our wealth, goodness, dedication, hard work and self-reliance.”

Batman has a fierce sense of justice but almost no sense of grace. He refrains from killing his enemies, not out of mercy, but because it falls under his rules of justice. He’s driven by an effort to be worthy. Young Bruce Wayne was powerless to save his parents from being gunned down and so he dedicates his life to never being powerless again. There may not be any atheists in foxholes but Batman doesn’t feel worthy to beckon the almighty even while defusing a bomb. See these panels from The Dark Knight Returns: Book one.

Many people, like Batman, feel like they cannot forgive themselves that their sins are too great to just wash away. This seems like a noble sentiment, that someone would not let themselves off the hook or so quickly forget their misdeeds. But it’s actually a form of idolatry. Anyone who says they cannot forgive themselves is putting their standard of grace above God’s. God forgives all sins. There is nothing you can do that is unforgivable by Christ’s justifying work on the cross. But when we say, “God may forgive me but I can’t forgive myself,” we’re saying Christ’s sacrifice wasn’t enough. We make ourselves a god whose justice has not been satisfied. It’s blasphemy and idolatry. We must abide in God’s grace.

In many ways Batman is just as conflicted as his psychotic super villains. As long as he sees self-perfection as something attainable he will always come up short and be miserable in the pursuit. As Brewer puts it, “Although Batman is as good as any human being could be, he will never be good enough. Neither hard work nor good works can free Bruce Wayne from the guilt and despair that torment him.”

Now, none of this is to say we have no work to do as people saved by God’s grace. Brewer shows us, through the character Spider-Man, that as Christians we have a great power on our side which comes with certain responsibilities. 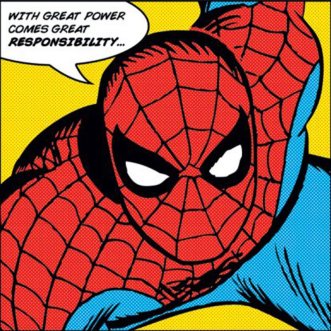 Spider-Man’s origin story ought to be as well-known as Adam and Eve. Several movies have shown that Peter Parker’s uncle Ben is killed by a criminal that Spider-Man let escape. This drives Spider-Man (Peter Parker) to realize that “with great power comes great responsibility.” This follows the common superhero origin story of peril-power-promise. A normal person faces some great perilous situation, comes out with great powers and then makes a promise to do good with these powers. Spider-Man’s origin diverts slightly from this. When Peter Parker first realizes his amazing powers he tries to make money with them. It’s only after his uncle is killed by a criminal he let go that he realizes he has a job to do.

The character arc of Christianity follows the superhero arc of peril-powers-promise in that we face sin-salvation-service. We realize our great peril that we are sinners in need of a savior, then we are called to salvation by Christ’s work on the cross. But then we have a job to do, we must serve others and share the gospel. Ephesians 2:10 says, “For we are God’s handiwork, created in Christ Jesus to do good works, which God prepared in advance for us to do.” God redeems and calls us not only to “follow the rules” and be good but also to be good for something. James 2:14-17 says, “What good is it, my brothers and sisters, if you say you have faith but do not have works? What good is it, my brothers and sisters, if someone claims to have faith but has no deeds? Can such faith save them? Suppose a brother or a sister is without clothes and daily food. If one of you says to them, ‘Go in peace; keep warm and well fed,’ but does nothing about their physical needs, what good is it? In the same way, faith by itself, if it is not accompanied by action, is dead.” Honestly, a lot of this responsibility of Christians involves just being there for people. Our number one concern for people should be their relationship with Jesus and a good way we can open doors to conversations about Christ and the gospel is by giving of our time and resources to help our neighbors. Donate food, clothing and time. Help people move, watch their dog, babysit their kids, paint their house. Whatever it takes to build trust with unbelievers and community among believers, should be a constant part of our lives.

There are several other characters that H. Michael Brewer mentions in this book, more than we have time to go through in one blog It’s great to see the influence of God in culture. Once Christ has redeemed your worldview it’s hard not to see him everywhere. But my ultimate take-away from Who Needs a Superhero? is, and I can’t emphasize this enough, I should have written this book.