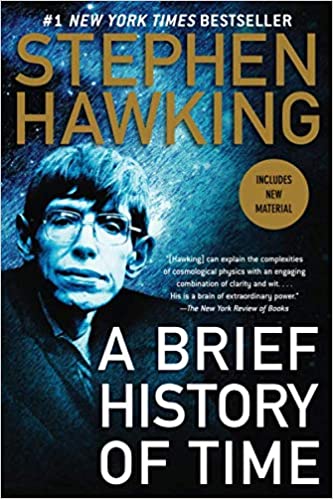 Hawking continually mentions God but I can’t tell if he’s actually acknowledging him or merely placating any theistic readers.

It was originally published in 1988, but I read the 2017 paperback edition with additional material.

I read this book because it has always appeared to me that the Big Bang Theory confirms a biblical truth that the universe had a beginning (In the beginning God created the heavens and the earth) and is slowly fading to an end. I knew Stephen Hawking originally proved this to be true and then later “disproved” the theory. I wanted to learn more about his theory and see exactly how he disproves the big bang as the beginning of the universe.

Stephen Hawking was an English theoretical physicist, cosmologist, and author. He’s one of those characters in human history that everyone knows about but few have read.

This book was relatively accessible to the average reader, although some parts get incredibly dense scientifically. But come on, wouldn’t you be a little disappointed if you understood every word?

Hawking alludes to a creator but it seems that he does so with an air of such confidence in his atheistic argument that it feels a bit like throwing a bone to what he deems a futile opposition. He writes, “One can imagine that God created the universe literally any time in the past…One could still imagine that God created the universe at the instant of the big bang…An expanding universe does not preclude a creator, but it does place limits on when he might have carried out his job!” (p.9). It almost seems like Hawking is allowing the reader to believe that God is behind all the natural workings of the universe, if that makes you feel better.

I learned that time is slower at different altitudes. Hawking talks a bit about time travel but it seems to be the most theoretical portion of the book. It deals heavily with string theory and the idea of parallel universes where the same thing is happening at different intervals. A wormhole would open up between the two strings and we could travel “to the past (or future).” Hawking also mentions the possibility of aliens. I’d say Hawking is open minded to a fault.

Hawking does explain himself clearly, or as clearly as possible to a scientific layman like me. The book does get dense and will challenge how well you paid attention in high school physics. But for the most part it remains interesting and readable.

Clocking in at 208 pages (including appendix), I’d recommend this book to anyone interested in the history of scientific thought. Hawking is a towering figure in academic and pop culture. If the book were any longer, I wouldn’t recommend it but the brief price of 208 pages seems a fair sum for insight into a genius’s mind.