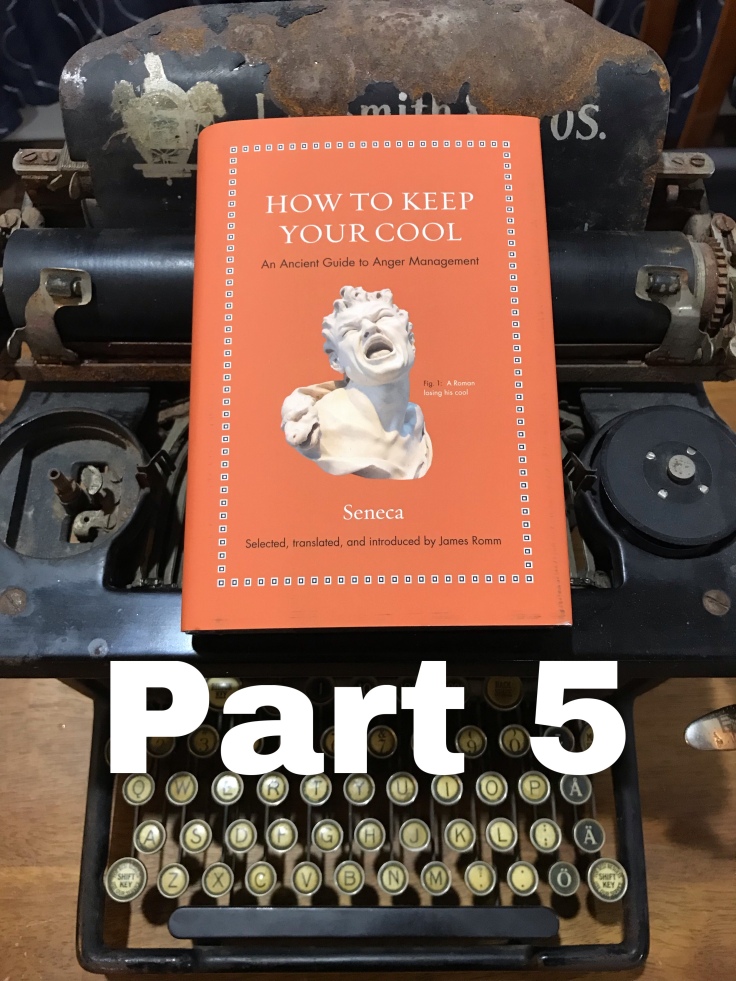 “A punishment that’s delayed can still be imposed, but once imposed, it can’t be withdrawn.” (p.49)

As the parent of a three-year old  and a one-year old, I have a hard time connecting with Seneca here. If my kids do something wrong and I wait to punish them later, they won’t be able to connect the punishment with the crime. Maybe my three-year old could, if it wasn’t too far after. With toddlers, the discipline has to happen in the moment and that’s hard because it’s usually in the heat of the moment. If my kid is reaching for a lit candle, I have to swat his hand away. I’d rather his hand have a swat than a burn mark.

The key with my little ones is consistency in discipline. If I say something is off-limits then it must remain off limits. Going back and forth on what they get disciplined for sends mixed messages. Sometimes I’ll tell them no on something that later I think isn’t really a big deal. But I already told them no so I have to stick with that.

But I understand what Seneca is saying. You can’t take back those unwarranted punishments that are dished out in the heat of the moment. When time allows, it’s best to take a step back and assess the situation. For me as a kid, it was always the classic, “go to your room and think about what you’ve done.” This meant I go to my room, cry, ask God for forgiveness and think about how not to do it again. I usually just ended up playing with my toys or reading.

Seneca’s point is, don’t let anger cause you to make an irreversible mistake. Sometimes we want to punish people (especially our kids), not because they’re necessarily doing something wrong but because they’re just irritating us. We can’t punish them for that because who are we? We’re not teaching our children to conform to our standards, we’re teaching them to love God’s standard.