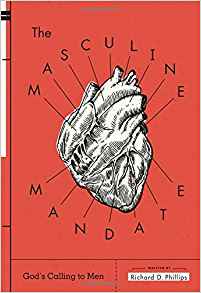 Chapter 1: Man in the Garden

“this is what modern and postmodern masculinity has been all about—men behaving like little boys forever, serving themselves in the name of self-discovery.” (p.11)

Phillips’ book centers around this theme of working and keeping. “’work and keep’…Taken together, these two words serve as a summary of the Bible’s mandate for masculine behavior.” (p.16) This is what it means to be a man, to work and keep. Phillips draws attention specifically to the first man, Adam in the Garden of Eden (Gen 2:15) where God commands him to work and keep the land. This is the masculine mandate because it covers many areas of the life of a man.

“There is nothing wrong with a man working simply to earn a wage, but Christians rightly want their labors to yield more than money for themselves and their families. Christian men should also desire to cultivate something worthwhile for the glory of God and the well-being of their fellow men…a man’s finger’s should be accustomed to working in the soil of the human heart.” (p.18)

“as we keep work in proper balance, retaining our primary identity in Christ, God wants us to invest significant passion in our work and find true meaning in it.” (p.24)

“although the introduction of sin into the garden changed the nature of work, God’s calling for man to work is entirely holy and good.” (p.25)

“A preacher should prepare and deliver his sermons for the benefit of the congregation—it is not pleasing to God for a man to preach as if no on is there.” (p.36-37)

Chapter 4: Man as the Image of God

One of these areas is a man’s prayer life. Phillips writes, “It is virtually impossible to find a man greatly used by God who is not strongly devoted to prayer.” (p.52-53) I have to admit, this is a struggle for me. I want to categorize this under the “keep” file of my mind but more often it feels like work. I have to make a concerted effort to sit down and intentionally pray. It doesn’t have to be a quiet, somber time of candlelit prayer. 1 Thessalonians 5:17 says, “pray without ceasing.” We can pray anytime, anywhere and we should. But to set aside time to focus and concentrate on God for more than a few seconds, takes work for me. I know that’s because I’m too busy trying to own myself and take matters of life entirely into my own hands. But we need prayer. The veil has been torn (Matt. 27:51) and we now have direct access and communication to God. We shouldn’t waste this holy privilege.

Another advantage the modern Christian man is the complete Bible. “Effective leadership always requires the leader to devote himself to acquiring the competence necessary to guide his particular flock. The most necessary competence of any leader is a knowledge of God’s truth in the Bible.” (p.66) The beginning of all knowledge is a healthy respect for God (Prov. 1:7). Jesus implores God the Father, “Sanctify them in the truth; your word is truth” (John 17:17). We have a measuring stick of truth for any situation that we may face in life. Men face marriage and fatherhood and the careers with a lot of questions. The questions basically boil down to, “am I doing this right?” We have a field guide given by the God that gave us our wives and children and jobs. Lets use it.

The only thing God created that was not good was a man alone in a garden. “God discovered something that was not as good as it ought to be…’It is not good that the man should be alone.’ (Gen. 2:18)” (p.77) God remedied this quickly by creating Woman. There is community in God’s very being. He is a triune God, that is, God in three persons, Father, Son and Holy Spirit–the trinity. So we are more Godly when we are in community. Men and women compliment each other perfectly. We are equal in value but not in function. Both genders provide different, meaningful perspectives in life, especially in a community of believers.

As long as human beings are human beings there are going to be struggles in marriage. It’s part of the fall. “God’s curses on the relationship were the poison for which God alone was the antidote. This is why marriage is practically hopeless apart from the grace of Christ, and why divorce is so rampant. The struggles that men and women experience in marriage are intended by God to drive us to our knees and to our Bibles, that we would restore God to the center of our lives.” (p.100) Husbands and wives need to see strife as an invitation to fall into God and his Word. He is our common ground and standard of behavior. Problems in marriage are human problems, that is to say they’re problems with sin. Jesus is the antidote to all sin and we are in constant need of inoculation.

It’s commonly misunderstood that Caine was the first person in human history to shed innocent blood, the first killer, when he slew his brother Abel. But just a few verses before that in Genesis 3:21 it says, “And the Lord God made for Adam and for his wife garments of skins and clothed them.” (ESV) God sacrificed the first animal to cover the sins of man thus initiating the Jewish sacrificial system that culminated in the ultimate sacrifice of Jesus on the cross. “It was a substitute that paid the penalty for Adam’s sin, as he and the woman were clothed in the hides of spotless, innocent animals.” (p.101) The wages of sin is death (Rom. 6:23) and that death has always been deferred to a substitute for God’s chosen people, even from the first people.

At one point Phillips refers to Ephesians 5:28-29 regarding the Christian mindset in marriage. “In the same way husbands should love their wives as their own bodies. He who loves his wife loves himself. 29 For no one ever hated his own flesh, but nourishes and cherishes it, just as Christ does the church, 30 because we are members of his body.” I love this section of scripture because, for me, it perfectly captures how I feel about my wife. If someone were to ask if I would ever get divorced, it’s like asking if I’d ever cut off my own arm or leg without any anesthetic. The answer to both is no. I consider my wife an extension of myself–that’s what “husbands should love their wives as their own bodies” means.

Chapter 8: Marriage and the Masculine Mandate.

“If I stop you at any time, will you be able to give me a rough sketch of your wife’s schedule for that day? Can you identify at least one major issue that is on her mind and weighing down her heart, making her afraid or frustrated or concerned? These are the things Peter has in mind. Most husbands have not the slightest clue what is going on with their wives’ schedules…The reality is that a husband should know what is going on in the heart and mind of his wife if he is to minister to her faithfully in prayer and with God’s Word.” (p.115) This I an excellent, practical way for the Christian man to care about his wife. When our wives are not with us they’re always doing something, whether it’s wrestling with the kids or at work or spending time with friends, they’re living and feeling and reacting to things in their life. As husbands, we have to be aware of our wives hearts in all these activities.

Chapter 9: To Work – The Discipling of Children

“But if the father frequently says, ‘I’m sorry, I don’t have time;’ the child will inevitably point his heart elsewhere—someplace there is interest, attention, and excitement about his or her life. It is precisely a child’s deep need for a sense of belonging that explains many of the troubles of young people—everything from drugs and gangs to premature romantic entanglements.” (p.130).

Phillips summarizes his view on fatherhood by going through four key elements. “This is my simple agenda to ensure I am actively and intimately involved in the lives of my children: Read, Pray, Work, Play. I must read God’s Word to and with my children regularly. We must bear each others’ burdens in prayer and worship the Lord together at His throne of grace. My children need my positive, encouraging involvement in their work (and they need an invitation into some of mine). And we need to bind our hearts with laughter and joy in shared play, both one-on-one and as a complete family. This all requires time, for time is the currency with which I purchase the right to say, ‘My son, my daughter, give me your heart.’”  (p.139) Our goal should be for our kids to love the standard, not merely conform to the standard. I want my kids to be obedient because they love me and don’t want to disappoint me, not because they’re following orders. This love is earned by spending the sort of value time Phillips talks about, read, pray, work, play. These things take effort and that can be difficult at the end of a long work day. But the rewards infinite.

Chapter 10: To Keep – The Discipline of Children

“To be a father is to be an authority figure who rules his children by commands and enforces his rules through the God-given means of corporal punishment and verbal correction.” (p.148)

Spanking has become a controversial topic in parenting. This is because it’s often done incorrectly. Corporal punishment should have higher goals than just angrily smacking your kid when he’s bad. “The goal is a compliant child who acknowledges sin and accepts correction. Those who do not respond in this way should be spanked again, until their hearts yield. Our goal is that through the way we administer spankings, and the attitude and demeanor we display, our children will conclude, ‘I shouldn’t do that again,’ without ever thinking, ‘My father is mean and angry.’” (p.150)

This is an excellent book every Christian man should read. Richard Phillips gives a straightforward, cut-to-the-quick guide on biblical manhood. I highly recommend it.